There's a new humorous barbecue review site run by a pair of North Carolina BBQ fans of the Jewish persuasion. There're not many reviews yet, but the humor in the FAQ and BBQ U tabs makes a visit worthwhile. There's also a respectful link to this blog in the Oinks tab, which I much appreciate.

Let's hope they keep it up, so we barbecue fans can trade info. I put a link up in the right hand panel for later viewing.

Take a look at the BBQ Jew. 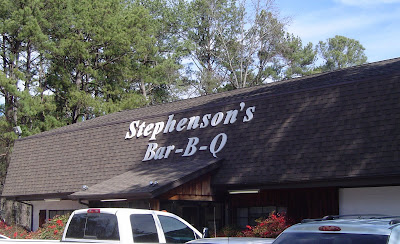 Stephenson's is a stop on the NC Barbecue Society Historic Trail. It has been around for a long time. The address is a little confusing. The restaurant isn't in the town of Willow Springs, but out in the country a mile north of McGee Crossroads.

My lunch order was a Small Pig, a nice sized serving on coarse chopped barbecue with hushpuppies with two sides, spiced apples and cabbage, and hushpuppies. The barbecue was nicely spiced with red peppers and standard vinegar based sauce. The vegetables and hushpuppies were nicely cooked. However, everything was over moist. The pig was soogy leaving a watery juice behind. The pork was not overcooked. It was like it had sat in extra water waiting to be served. The same was true of the veggies and even the hushpuppies. I liked the taste of everything, but the extra liquid feel was offputting.

My iced tea was served with a bowl of crushed ice and a extra pitcher of tea. On the table, there was a small squeeze bottle of sauce next to a large squeeze bottle of Texas Pete. Neither of these were needed.
Posted by Dave at 12:00 PM No comments:
Labels: Reviews
Newer Posts Older Posts Home
Subscribe to: Posts (Atom)