Byrd's is back in business, according to the waitress, since February. I know that I checked it out about then, but it was not open. I must have just missed it. Matt Pendergraft, from the defunct Durham Sandwich Company, has reopened the restaurant.

I ordered the sliced plate with hush puppies and slaw, which came with a slice of Texas toast, as well. Hush puppies is a side option, rather than part of the plate, as I would expect. The sliced pork was sliced thicker than I would expect. I needed a (plastic) knife to cut the pieces. It was a little fatty, but not too bad with a touch of their decent barbecue sauce. Everything is served on disposable dishes. Obviously they are geared more for the carryout business.

The restaurant is pleasant, though small. It is going to take a couple of visits to get a feel for the place.

Pitstops Along the Barbecue Highway

Pitstops Along the Barbecue Highway is another excellent website on bbq in North Carolina and elsewhere. They even review a bbg restaurant in Austria. The reviews are a little dated, but aren't they all? Even this site is dated. That is one thing about a blog, you can get a feel for when the information was current.

The gem of this site is as complete (as possible) a list of bbq joints in North Carolina, sorted by city/town. Even though there are a couple of places not in the list, I am truly amazed at the work that went into compiling this list.
Posted by Dave at 11:03 AM No comments:
Labels: Musings

"William Donald "Don" Murray, 64, of 3610 South Beaver Lane, died Thursday, March 31, 2005 at Rex Healthcare after months of declining health. Don was born in Wilson County on May 15, 1940 to the late William Doyette Murray, Sr. and Tempie Lindsey Murray. A self-employed entrepreneur, Don began his career at the age of 9 working for Parker's Barbecue in Wilson until the age of 33. He left Wilson and moved to Raleigh in 1973 where he formed a partnership and opened Don Murray's Barbecue on Capital Blvd. Soon Don decided to strike out on his own, dissolving the partnership and in August 1979, Don opened Barbecue Lodge, Inc. in Mini City on Capital Blvd. His business thrived and soon had restaurants around North Carolina." 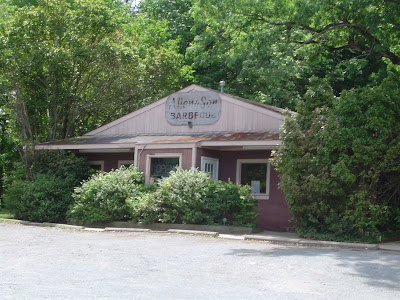 After months of less than stellar barbecue restaurants, we have a winner. Allen and Son has been on my must try list since the beginning, but I kept dropping by when they were closed.

I ordered the barbecue plate, which comes with a decent serving of pulled and chopped pork, a decent slaw and a handful of decent hushpuppies. The pork is very good. It has a good full flavor, a mix of the hickory smoke and the spiciness of the barbecue sauce. A pitcher of the house sauce was brought with the plate. I tried a dash on a chunk of pork and nearly had my teeth knocked out. The sauce is not for the timid. Easily, the best pork I have had since my adventure with the smoker at camp.

The walls of the restaurant are covered with prints of duck hunting stamps. It seems like an odd mix, but more to my taste than the Nascar decor at Murray's BBQ and Seafood.
Posted by Dave at 2:13 PM 11 comments:
Labels: Reviews
Newer Posts Older Posts Home
Subscribe to: Posts (Atom)