If you do not make your own barbecue (and who does?), Brookwood Farms sells excellent barbecue in Harris Teeter and other large supermarkets around central NC. The barbecue is a reddish color, incorperating a little tomato from the west, but has a vinegar tang from the east. There are lots of the brown crispy bits emblematic of fire cooked barbecue. This barbecue is better that what I find in half the restaurants that I recommend in this blog.

My teenage son has started eating barbecue and he picked it out in the store. I had always considered supermarket barbecue to be lowest common denominator meat, that would need sauce or spice to make it edible. Brookwood Farms is great right out of the tub. Heat it in a sauceban and enjoy. 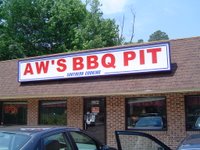 AW's replaced the Lewis BBQ on NC 55. Lewis had decent sides, but insipid barbecue. I had heard good things about the barbecue here, so I had high hopes. The restaurant itself was unchanged.

I had the chopped barbecue plate, with hushpuppies, potato salad and stew. The sides were good. The barbecue looked great, lots of the appropriate brown bits that comes from cooking over fire. BUT the vinegar in the sauce was overwhelming. I could not taste the meat.

Maybe this was just a bad day. I'll try this again. It has promise.

Update- AW's has a counter in the food court of the Triangle Outlet Mall in Morrisville. I didn't try it. The mall is nearly dead.
Posted by Dave at 12:31 PM 1 comment:
Labels: Reviews
Newer Posts Older Posts Home
Subscribe to: Posts (Atom)